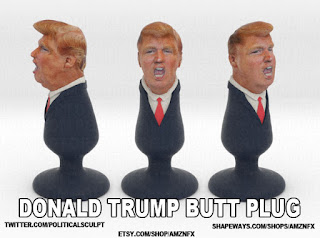 The Donald Trump butt plug, The Trump Poop toupee, and the Trump Megyn Kelly Tampon Disposal unit can be  purchased at Politicalsculptor.com

I usually make butt plugs to insult dictators, homophobes and politicians. When I heard Donald Trump's remarks about Mexicans and Latinos from South America I was especially angry. You see, I was born and raised in Mexico and moved to United States when I was 11 years old. So I don't approve of what Donald Trump, Ted cruz and much of the Republican Party have to say about us hard working Americans.

When Donald Trump announced he was running for presidenthe decided to use Latinos as a scapegoat and blame us for everything that is ailing America. Many republican politicians have done this before but never in such an overt and offensive way.

I’ve seen people blaming us for taking "their" jobs instead of blaming the corporations and Republicans that give tax incentivesto corporations that outsource American jobs. I’ve seen Klans men blaming us for infectious diseases instead of blaming the lack of healthcare and vaccinations. I’ve seen people label us as drug muleseven though America sends their guns and their drug money to South America while American Banks Laundry the drug money. Even though I’m pretty familiar with racist lies, this new talking point about Mexico sending their rapists to the United States was a new low.  Latinos and immigrants have become the sacrificial goat that republicans love to pick on because even though there are millions of  we don't come out and vote. So this is why Republicans like to beat us down in order to get ratings and votes from their racist base voters.

However, this is what the Republican party has evolved into. A bunch of racist Orangutans throwing shit at the wall and seeing what sticks or puts them on TV.

Donald Trump is not a dumb man. He might have been born with a silver spoon and declared bankruptcy 4 or 5 times but he is not stupid. He decided to attack immigrants and specially Mexicans because he thinks we have no power. If you haven't read his comments here they are.


“When Mexico (meaning the Mexican Government) sends its people, they’re not sending their best. They’re not sending you (pointing to the audience). They’re not sending you (pointing again). They’re sending people that have lots of problems, and they’re bringing those problems to us. They’re bringing drugs.They’re bringing crime. They’re rapists. And some, I assume, are good people! But I speak to border guards and they tell us what we’re getting. And it only makes common sense. They’re sending us not the right people. It’s coming from more than Mexico. It’s coming from all over South and Latin America, and it’s coming probably from the Middle East. But we don’t know. Because we have no protection and we have no competence, we don’t know what’s happening. And it’s got to stop and it’s got to stop fast.”

Such comments would have gotten any presidential Candidate kicked out of any decent Republican Party. However, instead he soared to 2nd and 1st place in polls among republican voters. So if you are brown and call yourself a republican YOU ARE NOT WANTED in the Republican Party. I know plenty of these so-called tio thomases (Tomases?) who seek acceptance yet are shown over and over again they are not wanted.

So here is my response to Donald Trump's remarks that Mexico sends their worst, their rapists, and their drug dealers: screw you and your Republican Party. I was not sent here by the Mexican Government. I came here with my family thanks to my step father who is also and Immigrant, but from Finland, so he doesn’t face the racism that immigrants from South American do. We came here looking for the American Dream and my parents worked their butts off so my brothers and I could go to college and serve in the armed forces, which my brother did.

I'm no rapist and no drug dealer. I have a college degree in 3D animation and run my own 3D printing business and guess what? I can make you into any shape I want and 3D print you and sell you to others who share a dislike of you. You can threaten to sue me like you have done hundreds of times to others. But you are a public figure and my making you into a butt plug is Freedom of Speech. Welcome to America Mother Fucker!!

So, next time you decide to insult a whole race in order to further your political career or get yourself on TV, remember we are engineers, we are 3D printers, we are doctors, we clean your house and we cook the food you eat so Don't Fuck with us.

PS. It doesn't matter if people justify that Trump was referring to "illegals".. Trump insulted a whole race and then inserted "illegal" as a justification for his hateful and ignorant comments.. I'm sick of all this racism being thrown out and people thinking is ok because they add "illegal" to their racists sentence.. There is no difference between a Mexican who comes here in a plane or jumps the border.. If anything people who jump the border work a million times harder than those that come here legally.. because believe it or not a legal immigrant will ever pick tomatoes or do the hard work lazy americans refuse to do and "illegals" do

(This model can only be 3d printed in sandstone color print. This is not to be used as an actual sex toy or is recommended for such use.. Sandstone is very porous and has a rough surface.. So please don't attempt such use.) We are looking to make this into an actual usable toy but we need funds and resources to manufacture this.. For the meanwhile This is meant as a decorative item and a conversation piece.)

Thanks for the press.. here are some links

Email ThisBlogThis!Share to TwitterShare to FacebookShare to Pinterest
Newer Posts Older Posts Home
Subscribe to: Posts (Atom)
You Can resume buying my Left Shark at
My Etsy Shop
or You Can buy the rest of my work at
My Shapeways Shop
Donate and learn about my legal Fund
gofundme Campaign

my work in TV
russell Howard's Good news show in UK
Politics Nation on MSNBC
CNN left shark
Fox Business
Chris Matthews on MSNBC
Channel 12 new jersey
Seth Myers show
Paul Henry show
shows like HardBall Chris Mathews in MSNBC and the Late night show with Seth Meyers. However most of the attention to my work has been abroad in shows like Howard Russell TV show, Paul Henry show or a funny French TV show Le Grand Journal . Anyways i think i pretty much established that my work is satirical in nature and sometimes offensive if you are a Putin or Kim Jong Un supporter who likes to send death treats.